The Three Graces (Monument of the Heart of Henry II)

3D
Scan The World
5,366 views 331 downloads
5 collections
Community Prints Add your picture
Be the first to share a picture of this printed object
1 comments

The Three Graces (Monument of the Heart of Henry II)

Three young women standing back to back with their hands clasped seem to be slowly performing a round dance. On their heads they bear an urn which once contained the heart of Henry II, king of France. The very embodiment of grace, these figures were carved by Germain Pilon, considered, together with Jean Goujon, as the greatest 16th-century French sculptor. The monument was commissioned by Catherine de Médicis for her deceased husband.

Commissioned in 1561 by Queen Catherine de Médicis to pay tribute to her late husband, King Henry II, who died after being wounded in a tournament in 1559, it was also intended to receive the queen's heart on her death. It was placed in the church of the Celestine monastery, Paris. Germain Pilon carved the Three Graces and the Italian sculptor Domenico del Barbiere executed the triangular pedestal and provided the model for the bronze urn (melted down during the Revolution, replaced by a gilded wood copy).
According to a custom practiced by the French monarchy since the 13th century, the king's heart was placed in a separate tomb in the church of his choice, while his body was laid to rest in the basilica of Saint-Denis. The tradition was revived in the 16th century when King Henry II commissioned sculptor Pierre Bontemps to execute the Monument of the Heart in honor of his father, Francis I, to be placed in the abbey of de Hautes-Bruyères (Yvelines); it is now in Saint-Denis. instead of carving a recumbent effigy of the deceased, Bontemps broke with tradition and sculpted a richly decorated urn, whose secular bas-reliefs paid homage to a sovereign who had been a lavish patron of arts. The monument to Henry II is still more audacious, with the Three Graces dancing a silent round in a spirit of pagan antiquity.

The idea for the monument may have come from Primaticcio. In charge of the building site at Fontainebleau under Henry II, he was appointed director of royal tombs by the queen. The Three Graces were probably inspired by an antique sculpture of the triple deity Hecate. They also recall a cassolette designed for Francis I by Raphael and engraved by Marcantonio Raimondi. The significance of the Graces has given rise to much discussion. For the ancient Romans, they symbolized conjugal fidelity. The inscriptions on the base, which commemorate the indestructible union of the married couple, give credence to this interpretation. The monument thus legitimized the political role played by Catherine de Médicis in the running of the kingdom. The monks in the Celestine monastery, shocked by these irreligious figures, were quick to pronounce them theological Virtues.

Pilon carved the three women out of the same block of marble, creating an impression of a fusiform volume. The theme, the light tunics, the measured elegance of the gestures, the serenity of the expressions, and the regular facial features are all references to antique statuary. The spirit of the work is, however, very different. Pilon saw the bodies as towering flames. He adopted Mannerism's elongated canons of beauty: slender silhouette, tiny high breasts, long neck, tapering hands and feet. On these svelte, firm bodies, the fine fabric, whether voluminous or figure-hugging, suggests the undulating movement of a flame. The artist hewed deep into the marble and carved sharp-edged drapery that catches the light, adds rhythm to the surface, and suggests the slight swaying movement of the dance. The supple play of arms emphasizes this sense of movement. The beauty of the marble group is completed by the very fine craftsmanship. 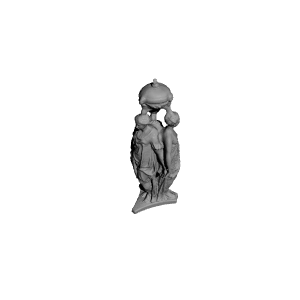