3D
Scan The World
4,220 views 667 downloads
5 collections
Community Prints Add your picture
Be the first to share a picture of this printed object
0 comments

The arrangement of these three nude females recalls the traditional composition of 'The Three Graces'. However, Maillol insisted that they were three nymphs of the 'flowery meadows', and commented that they were too powerful to represent the Graces. His pupil Lucile Passavant, who later became a distinguished sculptor and wood-engraver, posed for the central figure when aged nineteen. Maillol worked on the three figures in plaster between 1931 and 1937. The group was cast in lead in 1938, and the edition size is thought to be six. Maillol preferred the material of lead for this group because he felt that bronze would be too dark in character for the flowery theme. 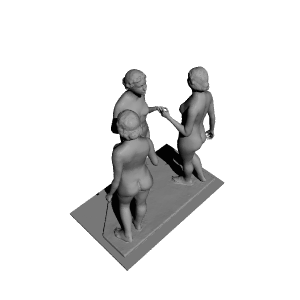