3D
Scan The World
1,769 views 69 downloads
Community Prints Add your picture
Be the first to share a picture of this printed object
0 comments

This sculpture portrays a female figure captured in the dynamic act of dancing, probably to the rhythm of a double flute (aulos) held between her hands - missing in this sculpture. This statue type, also known from other Roman copies, is thought to be a portrait of Praxilla, the Greek poet (5th Century BC) depicted in a bronze statue by the sculptor Lysippos (ca. 320 BC), this version originates from the Hadrianic period (AD 117-138) 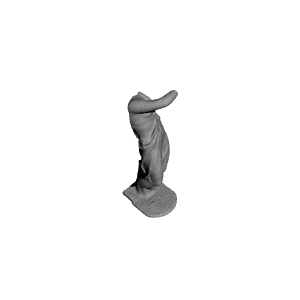