The Triumphe of the Republic in Paris, France

The Triumphe of the Republic in Paris, France

The place de la Nation (formerly place du Trône, subsequently place du Trône-Renversé) is a circle on the eastern side of Paris, between Place de la Bastille and the Bois de Vincennes, along the border of the 11th and 12th arrondissements.

Widely known for having the most active guillotines during the French Revolution, the square was renamed the Place de la Nation on 14 July 1880, Bastille Day.

Featuring a large bronze sculpture, the 'Triomphe de la République', the square is encircled by shops and a flower garden — and is served by the Paris Metro station Nation. 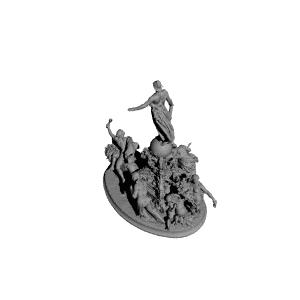 ×
4 collections where you can find The Triumphe of the Republic in Paris, France by Scan The World
×
Peter Song
@PeterSong
2
Printed on: Zortrax M200
Material: ABS
Posted at: 27th October 2021

I printed it with below condition. Layer Thickness : 0.14mm Printing time : 20h 8m used filament : 56m It was hard to remove supporter -_- because of complex shape of this output. Please enjoy it! -Inbo Song(my name), 3DGURU, from Korea-