3D
Featured Scan The World
10,267 views 1,039 downloads
6 collections
Community Prints Add your picture
Be the first to share a picture of this printed object
0 comments

The two young men are engaged in the pankration, a kind of wrestling similar to the present-day sport of mixed martial arts. The two figures are wrestling in a position now known as a "cross-body ride" in modern freestyle wrestling. The upper wrestler has his left leg entwined with his opponent's left leg, with his body across the opponent's body, lifting the opponent's right arm. In a well-known modern series of wrestling moves, the upper wrestler would now try to lift his opponent's arm above his head to force a pinning move called the "Guillotine."Their muscular structure is very defined and exaggerated due to their physical and sustained effort.

Although the original is based in Florence, many other copies exist around the world including the Louvre in Paris. 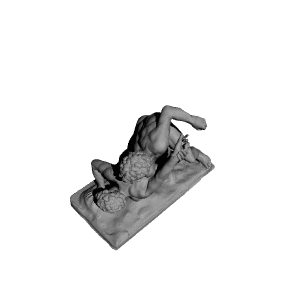 ×
6 collections where you can find The Uffizi Wrestlers at the Uffizi collection in Florence, Italy by Scan The World