Athena Parthenos (Ancient Greek: Ἀθηνᾶ Παρθένος; literally, "Athena the Virgin") is a massive chryselephantine (gold and ivory) sculpture of theGreek goddess Athena, made by Phidias and his assistants and housed in the Parthenon in Athens. Its epithet was an essential character of the goddess herself. A number of replicas and works inspired by it, both ancient and modern, have been made.

It was the most renowned cult image of Athens, considered one of the greatest achievements of the most acclaimed sculptor of ancient Greece. Phidias began his work around 447 BC. Lachares removed the gold sheets in 296 BC to pay his troops, and the bronze replacements for them were probably gilded thereafter; it was damaged by a fire about 165 BC but repaired. It continued to stand in the Parthenon in the 5th century AD, when it was removed by the Romans[citation needed]. An account mentions it inConstantinople in the 10th century.

The ancient historian Pausanias gave a description of the statue:

...The statue is created with ivory and gold. On the middle of her helmet is likeness of the Sphinx ... and on either side of the helmet are griffins in relief. ... The statue of Athena is upright, with a tunic reaching to the feet, and on her breast the head of Medusa is worked in ivory. She holds a statue of Victory that is approx. Four cubits high, and in the other hand a spear; at her feet lies a shield and near the spear is a serpent. This serpent would be Erichthonius. On the pedestal is the birth of Pandora in relief.

The general appearance of the Athena Parthenos, although not its characteristics and quality, can be assessed from its image on coins from its reproductions as miniature sculptures, as votive objects, and in representations on engraved gems.

Athena's head is inclined slightly forward. She stands with her left hand resting on an upright shield. Her left knee is slightly bent, her weight slightly shifted to her right leg. Her peplos is cinched at the waist by a pair ofserpents, whose tails entwine at the back. Locks of hair trail onto the goddess's breastplate. The Nike on her outstretched right hand is winged; whether there was a support under it in Phidias' original has been much discussed; evidence in surviving versions is contradictory. The exact position of a spear, often omitted, is also not fully determined, whether held in the crook of Athena's right arm or supported by one of the snakes in theaegis, as N. Leipen restores it, following the "Aspasios" gem.

The sculpture was assembled on a wooden core, covered with shaped bronze plates covered in turn with removable gold plates, save for the ivory surfaces of the goddess's face and arms; the gold weighed 44 talents, the equivalent of about 1,100 kilograms (2,400 lb); the Athena Parthenosembodied a sizeable part of the treasury of Athens.

Many thanks to Jerry Fisher for his scan of this incredible sculpture! 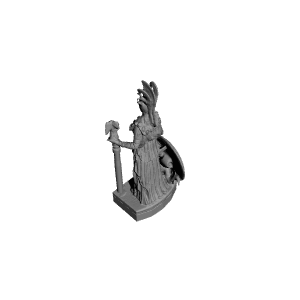 ×
13 collections where you can find The Varvakeion Athena at The National Archaeological Museum of Athens, Greece by Scan The World
×
Andrew Wu
@andrewwu
7
Printed on: Other
Material: PLA
Posted at: 02nd July 2022

around 18.5 cm, used support and broke some parts while taking out :/ nice piece