The Venus Callipyge at The Louvre, Paris

The Venus Callipyge at The Louvre, Paris

The Venus Callipyge, also known as the Aphrodite Kallipygos (or the Callipygian Venus, all literally meaning "Venus (or Aphrodite) of the beautiful buttocks", is an Ancient Roman marble statue, thought to be a copy of an older Greek original. In an example of anasyrma, it depicts a partially draped woman, raising her light peplos to uncover her hips and buttocks, and looking back and down over her shoulder, perhaps to evaluate them. The subject is conventionally identified as Venus (Aphrodite), though it may equally be a portrait of a mortal woman.

The marble statue extant today dates to the late 1st century BC. The lost Greek original on which it is based is thought to have been bronze, and to have been executed around 300 BC, towards the beginning of the Hellenistic era. The provenance of the marble copy is unknown, but it was rediscovered, missing its head, in the early modern era. The head was restored, first in the 16th century and again in the 18th century (in which case the sculptor followed the earlier restoration fairly closely); the restored head was made to look over the shoulder, drawing further attention to the statue's bare buttocks and thereby contributing to its popularity. In the 17th and 18th centuries the statue was identified as Venus and associated with a temple to Aphrodite Kallipygos at Syracuse, discussed by Athenaeus in his Deipnosophists.

The statue was copied a number of times, including byJean-Jacques Clérion and François Barois (this one) which was made during his residence at the French Academy in Rome, 1683-86. It was sent to Versailles, then to Marly-le-Roi in 1695, where it was provided with additional marble draperies by Jean Thierry, not to offend an increasingly prudish public taste; it remained at Marly until the original, when it found its way to the Jardin des Truileries and Louvre. 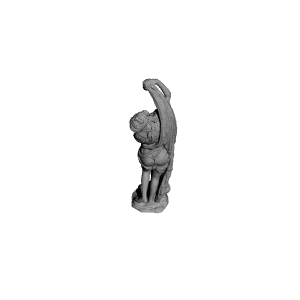 ×
5 collections where you can find The Venus Callipyge at The Louvre, Paris by Scan The World
×
Andrew Wu
@andrewwu
3
Printed on: Other
Material: PLA
Posted at: 07th October 2017

Surprisingly tricky to print. The leg needs careful support. The photo doesn't really do it justice.

Saw this at the Louvre, was thrilled to find it here. Printed with tree supports using copper silk PLA. This was almost the max height for my Ender3 V2. Great scan!