3D
360°
Featured Scan The World
7,418 views 1,648 downloads
15 collections
Community Prints Add your picture
Be the first to share a picture of this printed object
0 comments

La Violoniste (The Violinist) is an 85cm tall bronze by the French sculptor Eugene Delaplanche sold at the 19th and 20th Century Sculpture sale at Sotheby's London (11th July 2018). The work was made for The Opéra Garnier (1878) but was picked up by Carl Jacobson. This is one of many copies made of his most acclaimed work.

Delaplanche (1836-1891) was a French sculptor who gained the Prix de Rome in 1864. Though he completed many famous larger works, he was also noted for his decorations on vases, reliefs and smaller works. His best work is naturalistic, but at the same time dignified and simple in line, and shows sound mastery of technique.

He is represented by 15 works in the Glyptothek in Copenhagen, and in many other French museums and Churches. 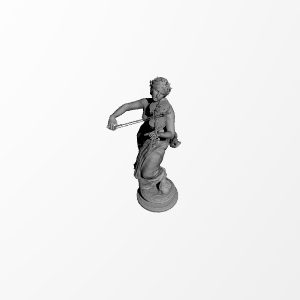