3D
Scan The World
3,590 views 299 downloads
Community Prints Add your picture
Be the first to share a picture of this printed object
0 comments

As the marble is weathered, this sculpture was probably once placed on the outside of a building, forming the central element of a larger group. The sculptor, Ambrogio di Mazolis (active 1524-36) may be the same 'Ambrogio' who was paid in May 1524 for work on the Scuola di San Rocco, one of the main religious confraternities in Venice. The sculpture depicts the Virgin Mary holding Jesus as a child, sculpted out of marble and inscribed with the sculptor's name and date (1536).

The inscription on the front of the base reads: M.D.?AMBRS TAIAPREDA DI MAZOLIS/ XXXVI. The word 'Taiapreda' is a Venetian dialect form of the Italian 'Tagliapietra', meaning stone-cutter. The sculptor may be identical with one bearing the same first name who received payment in May 1524 for work on the Scuola di Dan Rocco, one of the main religious confraternities in Venice. The statue may have formed the centre of a more extensive group, and the gaze of both Virgin and Child was probably directed towards figures of donors who wuld have commissioned and paid for the work. The marble is weathered and was probably situated on the outside of a building, perhaps in a lunette above a doorway. 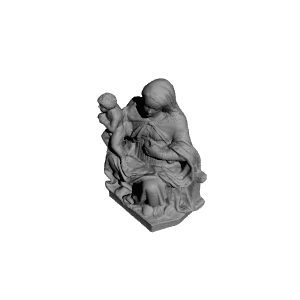