This is a cast of Benedetto da Maiano's Virgin and Child (1442-97), created around 1491-5. The original is housed at The Strozzi Chapel, the Church of Santa Maria Novella, Florence. Cast by Giovanni Franchi and Son in London (1866).

Renaissance images of the Virgin and Child were celebrated in the 19th Century, when this cast was made. These tender depictions of the relationship between a mother and her child influenced the work of British artists. This cast reproduces a relief commissioned by the wealthy Florentine banker Filippo Strozzi for his funerary chapel. 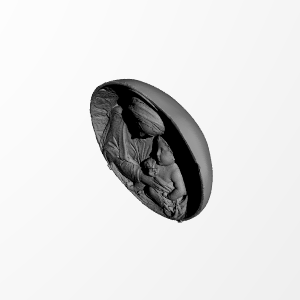 ×
8 collections where you can find The Virgin and Child by vam
×
Anthony Fortin
@anthonyfortin
2
Printed on: Flsun QQ-S
Posted at: 18th September 2020

Printed upside down and diagonal tp avoid drooping in the face amd to make it fit in my 200x200 print bed. Support at 90% infill with raft.

Printed at an angle, brittle supports, PETG, sliced with chopchop3d