3D
Scan The World
4,133 views 345 downloads
1 collection
Community Prints Add your picture
Be the first to share a picture of this printed object
0 comments

One major representative of the Beautiful Style in Austria was the Master of Grosslobming, whose designation derives from a figural cycle in the parish church in Grosslobming, Styria. He was probably active in Vienna, one of the great artistic centres of the fourteen and fifteenth centuries. He was also responsible for this fully three-dimensional Virgin from an Annunciation group.

The composition and movement of the standing figure, whose hands are crossed humbly across her midriff and whose gaze is directed expectantly towards the left, reveal that that is where the accompanying angel was located. This angel is now in the Medieval collection of the Belvedere in Vienna. He kneels, facing right and holding up his hands reverently before his body as he leans his head back, looking up and reacting to Mary’s gaze. The eye contact connects the two figures in a subtle way. This statue of Mary is the focus of the Liebieghaus collection of International-Style sculptures.

It is influenced by sculpture produced in Prague in the period around 1380 to 1400. In that city, the capital of the German Empire since the time of Charles IV, but especially under his sons Wenceslaus and Sigismund, an uncommonly artistic, French-influenced, ornamental-linear form of expression developed: the “International” or “Beautiful” Style. Its capacity to idealize beauty, especially in images of the Virgin, was already praised in its own day. Her graceful face, the delicate sweep of her movements, the lavish, soft drapery of her garments with their deep bowl-like folds before her body and the pleats on the side with their undulating lines, as well as the basic lyrical mood of the Frankfurt Virgin are all typical of the highly sophisticated works of this period. 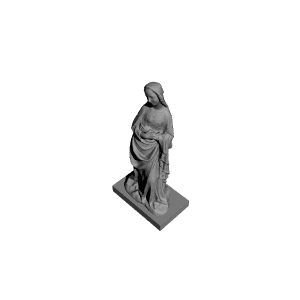