Michonne from The Walking Dead

Michonne from The Walking Dead

One of the best female characters on tv is Michonne from the walking dead. To create this design I firstly started out by modeling and posing her in 3D studio max, then importing the design into zbrush to add the muscles and the detail on the clothes, face and body. For the hair I used the curve tube brush in zbrush to create an effect as close to the charecter from the show.

I used the following brushes in zbrush to create the detail - move brush, claybuildup, and dam standard, for the hair curve tube and then surface to have some noise to it. Katana sword was made in 3d studio max with a reference from the net

The Walking Dead is an American post-apocalyptic horror drama television series developed by Frank Darabont. It is based on the comic book series of the same name by Robert Kirkman, Tony Moore, and Charlie Adlard. It stars Andrew Lincoln as sheriff's deputy Rick Grimes, who awakens from a coma to find a post-apocalyptic world dominated by flesh-eating zombies. He sets out to find his family and encounters many other survivors along the way.

Michonne is a main character and survivor of the outbreak in AMC's The Walking Dead. After the Greene Family Farm was overrun by zombies, Michonne encountered Andrea and the two became close friends throughout the winter until they entered Woodbury. Later Michonne left Woodbury and became a key member of Rick Grimes' group. Her favored weapon is the katana. 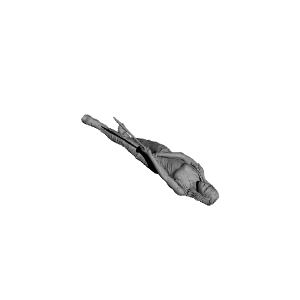 ×
18 collections where you can find Michonne from The Walking Dead by Stefanos
×
William J Hatten
@WilliamJHatten
1
Printed on: Creality Ender 3
Material: PLA
Posted at: 20th May 2022