3D
Scan The World
2,240 views 175 downloads
1 collection
Community Prints Add your picture
Be the first to share a picture of this printed object
0 comments

After the Second World War, many countries of Europe launched important rebuilding operations. In the Netherlands, this movement towards a better future developed design and architecture, already nurtured by the Surrealist and Abstract movements before the war.

The predominance of design influenced sculpture, to which it is very close, which enabled the modernist movement to grow rapidly in the Low Countries. Following the evolution of design, Dutch and Flemish sculpture created simpler, purer forms and shapes, placing themselves between figuration and abstraction.  These three sisters represented by Elia Ajolfi are more the evokation of an idea, of a concept of women from the early 20th century than a true representation of women from the 1960s. These impersonal forms embody a past that is fading away, brutally pushed away by two World Wars. 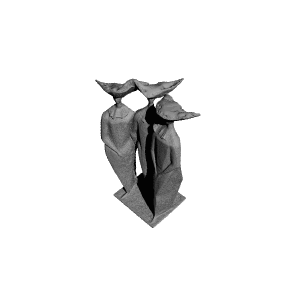