3D
360°
1,221 views 59 downloads
Community Prints Add your picture
Be the first to share a picture of this printed object
0 comments

The War Stone sits on the edge of War Stone Lane in Birmingham's Jewellery Quarter in the English Midlands. It probably sat in the area for thousands of years, since the last ice age, until the surrounding city enveloped it. It then fell into use as a boundary marker at the junction of the parishes of Aston, Birmingham and Handsworth. Despite the name, the stone has nothing to do with war, as the inscription below it shows:

"This felsite boulder was deposited near here by a glacier during the Ice Age, being at one time used as a parish boundary mark. It was known as the Hoar Stone of which the modern War Stone is a corruption."

The 3D scan was made using the Sony 3D Creator app on an Xperia XZ1 Compact smartphone which did a good job of capturing the shape as the photo of it shows. 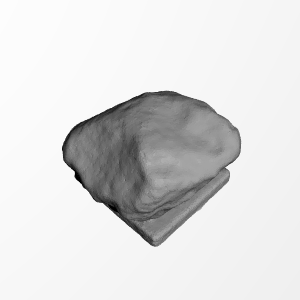