This wall plaque is a large version of my smaller witcher 3 talisman from the new game The Witcher 3: Wild Hunt 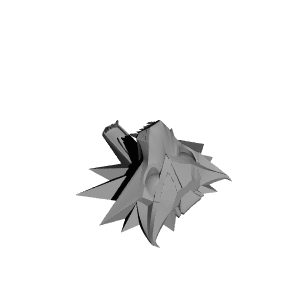 ×
87 collections where you can find The Witcher 3 Wall plaque by Skeletonbolts
×
Eduardo Samaniego
@Stampa3D
4
Posted at: 21st May 2022

3D Print/CubePro Trio-PLA Black. 200 um I like the 3D modeling of the wolf My 3D printing of today!

Thanks for the amazing model, I've done one and hollowed the eyes to add LEDs!

I printed this wall mount for my cousin's birthday - he's a huge Witcher's fan. I printed this with 10% infill, 3 perimeters and 2/2 top and bottom solid layers at a speed of 60mm/s. I also increased the size to 180% scale to fit the bed as much as possible. Note that for the teeth and the hole wall mounts, you do need to use support material (it doesn't mention support usage anywhere on the original page). For the paint and finishing I spray painted it with 2 coats of Krylon Brand Hardened Metal and then used acrylic paints for the red portions. Caution with the support structure removal and the teeth, those are very fragile and easy to shear off. Approximate print time for me was: 29H:54M:06S. Filament used was eSun PLA White.