The Yale of Beaufort

3D
Scan The World
1,546 views 164 downloads
1 collection
Community Prints Add your picture
Be the first to share a picture of this printed object
0 comments

The Yale of Beaufort

This sculpture depicts The Yale of Beaufort, one of the Queen's Beasts.

The Yale was a mythical beast, supposedly white and covered with gold spots and able to swivel each of its horns independently. It descends to the Queen through Henry VII, who inherited it from his mother, Lady Margaret Beaufort. The shield shows a portcullis surmounted by a royal crown. The portcullis (uncrowned) was a Beaufort badge, but was used both crowned and uncrowned by Henry VII. 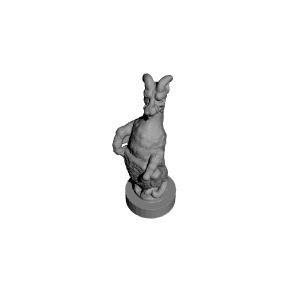