The Youth of Magdalensberg at the Kunsthistorisches Museum, Vienna

3D
Scan The World
3,944 views 259 downloads
Community Prints Add your picture
Be the first to share a picture of this printed object
0 comments

The Youth of Magdalensberg at the Kunsthistorisches Museum, Vienna

The Youth of Magdalensberg was a Roman bronze statue dating to the first century B.C., missing since ca. 1810 and now presumed lost, that was discovered in 1502 at the Carinthianmountain Magdalensberg. It is known today primarily from a sixteenth-century cast now held at theKunsthistorisches Museum, Vienna (Inventory # VI 1), which until 1986 was mistakenly regarded as the original.

Until the twentieth century, the statue was also known as the Youth of Helenenberg from the old name for Magdalensberg. The youth is the only ancient full-size bronze statue known from theEastern Alpine region and therefore is of great significance in Austria.

An inscription is incised on the right thigh:

An identification as the image of a god cannot be made on the basis of the statue itself or the inscription. Therefore, there are a variety of interpretations. These range from athlete, through torchbearer (Lychnophoros), to various divinites. The round shield offers no further help.

Recent interpretations see the statue as the cult statue of a Celtic Mars from the sanctuary on the mountaintop, or as a priest ofNoreia, or as part of a statue group dedicated to Noreia, or as a statue of Mercury which stood in the town's forum. 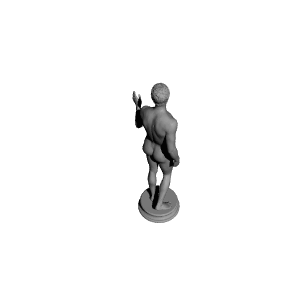 ×
0 collections where you can find The Youth of Magdalensberg at the Kunsthistorisches Museum, Vienna by Threedscans