3D
Scan The World
4,333 views 428 downloads
3 collections
Community Prints Add your picture
Be the first to share a picture of this printed object
0 comments

Rik Wouters often depicted his wife Nel, who was his favourite model. She appears in many portraits and drawings as a housewife or as a sleeping beauty, reading or doing the ironing. She takes a central place in his oeuvre and in the charming daily scenes that Wouters portrayed, but Wouters seldom portrayed her in so carefree and dynamic a manner as in this sculpture.

The immediate inspiration behind the sculpture was a performance by the American dancer Isadora Duncan, which so moved Wouters that he entertained the idea of creating a sculpture of a dancing figure. Naturally, it was obvious who would be the model for the sculpture. In no other work did Wouters match or seek the directness and dynamism, as well as the uncommon joy of life and ease that this work depicts. He made number of casts of ‘The Mad Maiden', which is sometimes also called The Foolish Virgin.

In his brief career, Rik Wouters created a large number of paintings, drawings and sculptures. He is Belgium’s most familiar Fauvist, known for using beautiful colours in his paintings, even though he considered himself primarily a sculptor. One of his self-portraits shows him wearing an eye patch: a chronic eye disease led to his death at a young age.

This is a challenging print and Cura is unable to provide sufficient support automatically. This particular print used manually added support with assistance from meshmixer. 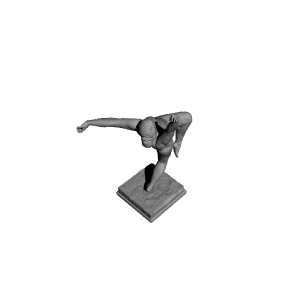 ×
3 collections where you can find The Mad Maiden at The Middelheim Museum, Antwerp by Scan The World