3D
Scan The World
2,154 views 154 downloads
1 collection
Community Prints Add your picture
Be the first to share a picture of this printed object
0 comments

This mask was found to the west of the Stoa of Attalos, Athens. The flat nose, huge open mouth and deeply wrinkled forehead render the type of the impudent slave of New Comedy. The New Comedy is the third and last period of Ancient Greek Comedy: it is comparable to situation comedy and comedy of manners. For the first time, love became a principal element in the drama. The New Comedy depicted Athenian society and the social morality of the period, presenting it in attractive colours but making no attempt to criticize or improve it. 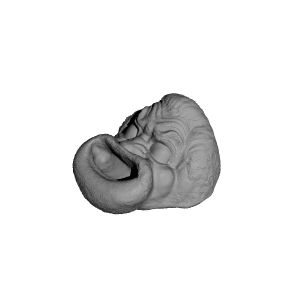