Theodoric the Great (454-526) was king of the Ostrogoths (471-526) and ruler of the independent Ostrogothic Kingdom of Italy between 493 and 524, regent of the Visigoths (511-526), and a patrician of the Roman Emperor. As a rulre of the combined Gothic realms, Theodoric controlled and empire stretching from the Atlantic Ocean to the Adriatic Sea.

Seeking to restore the glory of ancient Rome, Theodoric ruled Italy during one of its most peaceful and prosperous periods and was accordingly hailed as a new Trajan for his building efforts and religious toleration.

This bronze statue of Theodoric was sculpted by Peter Vischer the Elder, based on an initial design by Albrecht Durer, to be joined alongside 27 other statues lining the cenotaph of the Maximilian I. Maximilian (1459-1519) was Holy Roman Emperor from 1508 until his death. He was a great patron of the artists and science, commissioning artists such as Albrect Durer and Peter Paul Rubens, which can be seen in his memorial at the Hofkirche (Court Church) in Innsbruck, Austria.

The memorial, built by Emperor Ferdinand I (grandson of Maximilian), boasts a remarkable collection of German Renaissance sculpture, such as this one 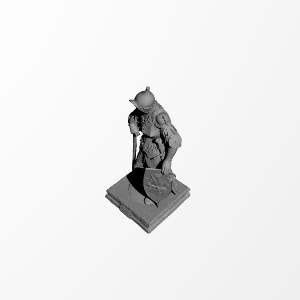 ×
43 collections where you can find Theodoric the Great by Threedscans
×
Bojesphob
@bojesphob
1
Printed on: Anycubic Photon
Material: Resin
Posted at: 23rd March 2021

Printed this to about 72mm scale. Going to paint it not like the statue but to be realistic (silver and gold on the armor, skin tones, etc). Thought it would be an interesting conversation piece. The sword and sheath were a bit thin at this scale (pushed a tiny bit to see if it was flexible and it popped off), and the shield came off and I'll have to reattach it, but the details turned out really well. Anycubic Photon Mono 2k with NOVA3D water washable resin.