3D
Featured Scan The World
5,932 views 1,010 downloads
5 collections
Community Prints Add your picture
Be the first to share a picture of this printed object
0 comments

This sculpture is one of a series that lines the basin of an equestrian statue dedicated to Erzherzog Leopold V (1586-1632).

The figurative work depicts Thetis, a goddess of the sea and the leader of the fifty nereids, holding a swan and surrounded by other gods in this overall monument. The fountain protects and honours Leopold.

German-born sculptor Caspar Gras was one of the finest metalworkers of the 1600s in Northern Europe. After learning the craft of goldsmithing from his father, he became an apprentice embosser at the court of Archduke Maximilian III in Bad Mergentheim. By 1610 he was promoted to Court Embosser and soon received most of the court’s commissions. These included not just relief sculpture, but also life-size figural works, equestrian statues, and fountains.

Gras also created many Kunstkammer pieces, which generally were small-scale works designed to be incorporated into a collector’s accumulation of precious and virtuoso art objects. He was now considered one of the most renowned bronze sculptors in the Tyrol, the Alps of western Austria. Yet, the death of Emperor Leopold V in 1632 and the Thirty Years’ War left the area in a severe financial depression, so Gras received few commissions in his later years and is primarily known from his earlier work. 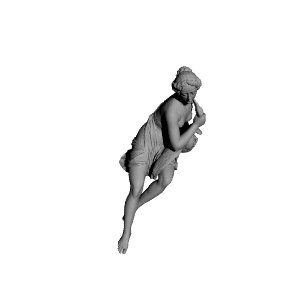 ×
5 collections where you can find Thetis by Threedscans