3D
Scan The World
2,515 views 88 downloads
Community Prints Add your picture
Be the first to share a picture of this printed object
0 comments

Thomas Fairfax was the 3rd Baron Fairfax of Cameron (1612-71). Perhaps the most accomplished Parliamentarian officer, Fairfax was appointed Lord General of the New Model Army after his victory at Marston Moor, 1644. His decisive string of victories, beginning with the battle of Naseby in 1645, won the Civil War. Extremism alarmed him and he refused t oserve on the court which tried the King or to lead the army into Scotland in 1650. He retired from public life until 1660, when he supported General Monck's march to London to demand a free parliament and was one of those who went to the Hague to greet Charles II before his Restoration to the throne.

The lead bust was created by an unknown artist circa 1650, on permanent display in the National Portrait Gallery. 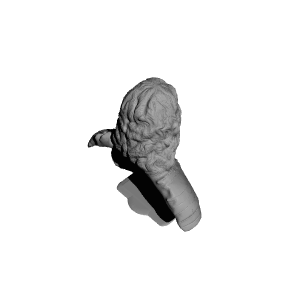 ×
0 collections where you can find Thomas Fairfax at The National Portrait Gallery, London by Scan The World