3D
Scan The World
1,086 views 68 downloads
Community Prints Add your picture
Be the first to share a picture of this printed object
0 comments

Thomas Guthrie (1803–1873) was a Scottish divine and philanthropist. He was one of the most popular preachers of his day in Scotland, and was associated with many forms of philanthropy, especially focusing on education; he was the founder of Ragged Schools. These charitable organisations were developed in working-class districts to provide free education to children from less fortunate backgrounds, despite their unkempt appearance and challenging behaviour.

This statue was raised in the man's honour, depicting him holding a bible and looking down at a "ragged boy". The inscription reads as follows: "Thomas Guthrie D.D (Doctor of Divinity), preacher and philanthropist 1803-1873, born at Brechin, Forfarshire, an eloquent preacher of the gospel, founder of the original ragged industrial schools, a friend of the poor and the oppressed." 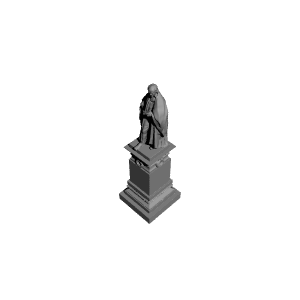