3D
Scan The World
2,911 views 145 downloads
Community Prints Add your picture
Be the first to share a picture of this printed object
0 comments

Thomas Mansel Talbot (1747-1813), shown here bare-chested and with long hair, was a wealthy Welsh landowner. He went on the Grand Tour from 1770 to 1775 and commissioned this bust of himself at a cost of £68 - a fairly standard charge - from the Irish sculptor Christopher Hewetson. At the same time he commissioned a bust of Pope Clement XIV (Museum no. A.22-1948).

Hewetson (B. Kilkenny with birth date unclear; d. Rome 1798). He worked in Dublin before moving to Rome to live and work in 1765, where he remained for the rest of his life. He specialised in portrait busts of British visitors on the Grand Tour and established himself as one of the prominent British sculptors working in Rome at that time. 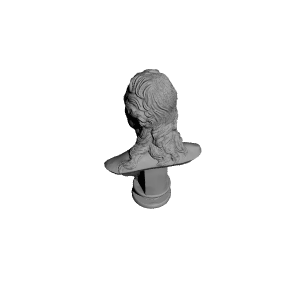 ×
0 collections where you can find Thomas Mansel Talbot by vam