3D
Scan The World
6,832 views 436 downloads
1 collection
Community Prints Add your picture
Be the first to share a picture of this printed object
0 comments

The figure, seated on stool visible only at the back, faces the river; hands clasped on lap; wears a flat hat, long tight sleeves and full-length outer robe - surface texture indicates fur. Face, hands and crucifix at neck are gilded. Gilded chain dropped across knees. Coat of arms in black, white, red and gold at the back of stool.

Sir Thomas More (/ˈmɔr/; 7 February 1478 – 6 July 1535), known to Roman Catholics as Saint Thomas More,[1][2] was an English lawyer, social philosopher, author, statesman and noted Renaissance humanist. He was an important councillor to Henry VIII and Lord Chancellor from October 1529 to 16 May 1532.[3] More opposed the Protestant Reformation, in particular the theology of Martin Luther and William Tyndale, whose books he burned and whose followers he persecuted. More also wrote Utopia, published in 1516, about the political system of an ideal and imaginary island nation. More later opposed the King's separation from the Catholic Church and refused to accept him as Supreme Head of the Church of England because it disparaged papal authority and he also opposed Henry's marriage to Anne Boleyn. Tried for treason, More was convicted likely due to perjured testimony and beheaded. 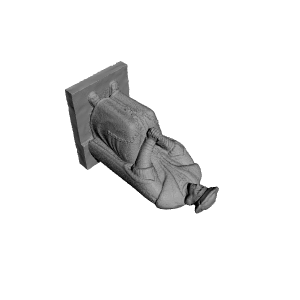 ×
1 collections where you can find Thomas More at Chelsea Embankment, London by Scan The World