3D
Scan The World
2,502 views 145 downloads
Community Prints Add your picture
Be the first to share a picture of this printed object
0 comments

Thomas Wolsey (c. March 1473 – 29 November 1530; sometimes spelled Woolsey) was an English churchman, statesman and a cardinal of the Roman Catholic Church. When Henry VIII became King of England in 1509, Wolsey became the King's almoner. Wolsey's affairs prospered, and by 1514 he had become the controlling figure in virtually all matters of state and extremely powerful within the Church, as Archbishop of York, the second most important cleric in England. The 1515 appointment of Wolsey as a cardinal by Pope Leo X gave him precedence even over the Archbishop of Canterbury.

The highest political position Wolsey attained was Lord Chancellor, the King's chief adviser (formally, as his successor and disciple Thomas Cromwell was not). In that position, he enjoyed great freedom and was often depicted as an alter rex (other king). After failing to negotiate an annulment of Henry's marriage to Catherine of Aragon, Wolsey fell out of favour and was stripped of his government titles. He retreated to York to fulfill his ecclesiastical duties as Archbishop of York, a position he nominally held, but had neglected during his years in government. He was recalled to London to answer to charges of treason — a common charge used by Henry against ministers who fell out of favour — but died en route of natural causes.

Bronze statue of Cardinal Thomas Wolsey sitting on a chair decorated with gothic arches and stretching his right hand, inviting the spectator to share the book held up in his left. His cardinal's robes are spread out uncomfortably in front of him, while his hat hangs over the back of the chair and a cat peers round one of its legs. 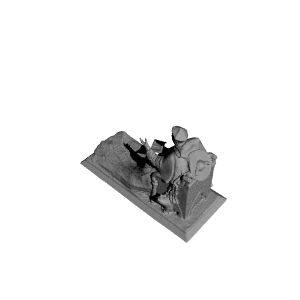