rom his humble beginnings as a slave to his rise as Warchief of the Horde, Thrall has cut a path through the history of Azeroth through his courageous actions, unfaltering will, and his mastery of the Elements as a Shaman. Thrall has been one of the most influential characters in the Warcraft universe; his intelligence, wisdom, and rationality has helped shaped the Horde into a unified force to be reckoned with.

Thrall founded the lands of Durotar and its capital city, Orgrimmar, as a sanctuary for orcs who pledged their loyalty to the Horde. Through his wisdom, Thrall has brought different races and backgrounds together under a banner of honor and strength, combining their might to give them hope for the future. Tested time and again, Thrall has led his people through many pivotal points in Azeroth’s history, including the freeing of the orcs and their journey to Kalimdor, the Burning Legion’s attack on Mount Hyjal, and the fall of the Lich King.

Printed at 0.2mm and 8% infill, this bust came out just fine. Their is a bit of support in some places but just use some clippers and it comes off easily. 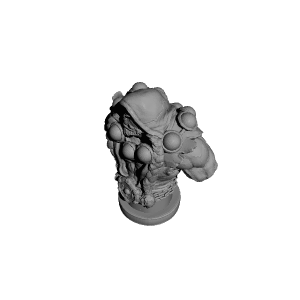 printed with kossel plus and painted

Awesome model, thank you very much to publish it. Really love it. Printed in Anycubic Photon.