3D
Scan The World
1,185 views 54 downloads
Community Prints Add your picture
Be the first to share a picture of this printed object
0 comments

This is a group of three reliefs from a tomb discovered in Cyprus. Two of the relieves depict standing sphinxes. The sphinx was a female monster with the body of a lion, the head and breast of a woman, eagle's wings and, according to some, a serpent's tail. She was sent by the gods to plague the town of Thebes as punishment for some ancient crime, preying on its youths and devouring all who failed to solve her riddle. The regent of Thebes, King Kreon (Creon), offered the throne to the one who would destroy her. Oidipous (Oedipus) took up the challenge, and when he solved the Sphinx's riddle, she cast herself off the mountainside in despair. Sphinxes were very popular in ancient art.

The relief in the middle depicts a head-portrait of an unknown person with the tongue hanging out, possibly an ancient god. In some ancient cultures tongue out was used as a greeting and a way of revealing to others that you are good and you do not have a black tongue of a demon. At the other end of the spectrum, throughout many cultures of the world, tongue-sticking is a powerful war gesture and an important and often final move in war dances. 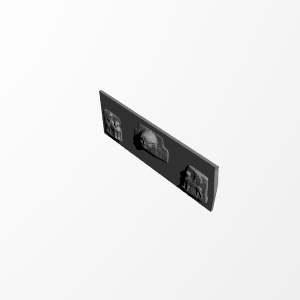