3D
5,876 views 214 downloads
2 collections
Community Prints Add your picture
Be the first to share a picture of this printed object
0 comments

The idea of my work, came up with the need to create something that transmitted the concept of THU.I wanted a character with personality, determination and that could identify himself with the spirit of a warrior.Therefrom came the THU Scarab Warrior, a faithful friend of a THU warrior, able to stand and face all odds to protect the most powerful and desired weapon of any warrior, the wacom pen.The scarab has its armor, which makes it very strong and durable; have their jaws that allow attack and defend themselves; and has its wings that give him a special power with his enemy. I wanted the character to have a slightly stiffer and hard surface forms, mainly in the head, to give him a more war like appearance, but never losing his natural side.The THU logo, could not be failed. It has been introduced not only in the supporting plate, but also in the character itself, being completely visible when the wings are closed, reinforcing its origin. 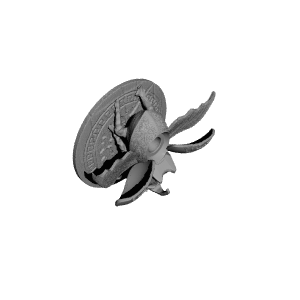