3D
360°
1,041 views 8 downloads
Community Prints Add your picture
Be the first to share a picture of this printed object
0 comments

This object was made in Tinkercad. https://www.tinkercad.com/things/hoPWIGEaXRa

The champion Airball player of 1979, was the one and only Thunderdood. Famed above all, the fabled, “Larry Bird of Earth” of his time, the fastest of the Stratosphere, VIP of the jet stream, and the MVP of the Somewhere Over New Orleans Floating Partiers. They were legend, of course, that was a time before the hurricane over the jetstream. It was epic, it was tragic, it was Thunderdood. Although Thunderdood was, was, was, missing. The Somewhere Over New Orleans Floating Partiers were ruined. It’s fine, it’s cool, it’s Thunderdood, it’s me. Yes, I know, it’s an honor, but hold onto your business tie, because I’m going to make another comeback.

Three days after the hurricane, Thunderdood was spotted off the coast of Clarens, a small town in South Africa. The White Cross sends a task force to locate the one and only Thunderdood. Meanwhile I was desperately trying to get to Apollo Bay VIC in Australia. See, I had visited here back in 1976 for a tournament and was familiar with the path to the jetstream. The search continued elsewhere, meanwhile I was comfortably floating back to New Orleans. The lightning horns, a Thunderdood speciality, were crackling with energy. Then… BOOM, I realised the energy and disappeared.

Airball requires speed, strength, and dexterity, but mostly speed. Speed, I have, a lot, a lot of speed, and strength, and dexterity, but SPEED… The horns on my head are special. They allow me to teleport. Thunderdood is a champion. So, anyway, I teleported, back, back to my home. Shortly after, a headline of the New Sky Times, Thunderdood, it reads, Thunderdood is Back. Our city of clouds is destroyed, but Somewhere Over New Orleans is rebuilt, The Somewhere Over New Orleans Partiers go on to win the 1989 airball championship, without Thunderdood. His body returned, but not him. Thunderdood did the impossible, he teleported, he won, but he couldn’t pull it off one last time. He is found over the Caribbean, two days after his last teleportation.

A grand memorial was built for the one and only Thunderdood. His name, his smile, his electricity was preserved forever. The only thing is, clouds don’t die, they only change. An endless tunnel of reincarnation. He’s out there. In About Over New York, they say, there is a cloud with a strange affinity for airball. 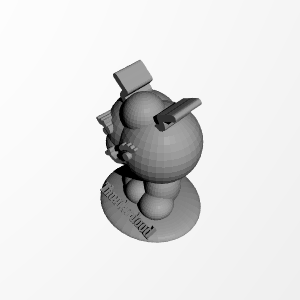 ×
0 collections where you can find Thunderdood by Val1