3D
360°
Scan The World
2,349 views 219 downloads
1 collection
Community Prints Add your picture
Be the first to share a picture of this printed object
0 comments

Born to Tiberius Claudius Nero and Livia Drusilla in a Claudian family, he was given the personal name Tiberius Claudius Nero. His mother divorced Nero and married Octavian—later to ascend to Emperor as Augustus—who officially became his stepfather. As Tiberius married Augustus' daughter and was adopted by him, he officially became a Julian, assuming the name Tiberius Julius Caesar. The emperors after Tiberius would continue this blended dynasty of both families for the following thirty years; historians have named it the Julio-Claudian dynasty.

The emperor's portrait is set in a modern bust by Guglielmo della Porta. 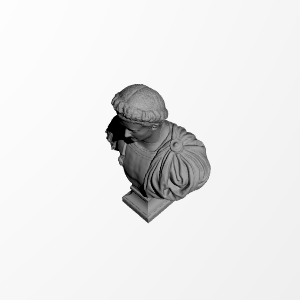 ×
1 collections where you can find Tiberius by Scan The World