3D
Scan The World
4,707 views 342 downloads
3 collections
Community Prints Add your picture
Be the first to share a picture of this printed object
0 comments

This sculpture shows a tiger attacking a gavial at the Ganges, a type of crocodile from India. The artist has captured a moment of action in a fight to the death. We can imagine the feverish battle that is about to take place. The realistic anatomy and muscle tension of the tiger convey menace and violence, but since the victim itself arouses our fear, the viewer’s reaction is one of curiosity rather than sympathy.

Antoine-Louis Barye (24 September 1796 – 25 June 1875) was a French sculptor most famous for his work as an animalier, a sculptor of animals. Antoine-Louis Barye, is the father and the Master of Alfred Barye "Le Fils" (1839-1882), who became himself a renowned sculptor, sometimes working in tandem with the French sculptor Émile-Coriolan Guillemin, known for the work "The Arab warrior on horseback". 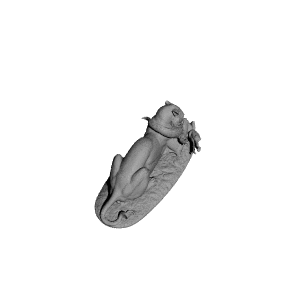 ×
3 collections where you can find Tiger devouring a Gavial; Ny Carlsberg Glyptotek (Copenhagen, Denmark) by geoffrey.marchal