3D
360°
Featured Scan The World
2,923 views 346 downloads
6 collections
Community Prints Add your picture
Be the first to share a picture of this printed object
0 comments

The head and upper torso of this colossal work are preserved without the arms. The luxuriant hair forms a quiff above the forehead, and the head is turned to the left and tilted upwards. The beard is worked in rough curls and the thick moustache forms a characteristic circle around the mouth. The eyes were made of a different material and inlaid.

This is a Hellenistic work of the 2nd Century BC, repeating a statue of Asklepios made by Skopas in the second half of the 4th Century BC.

Asclepius or Hepius is a hero and god of medicine in ancient Greek religion and mythology. 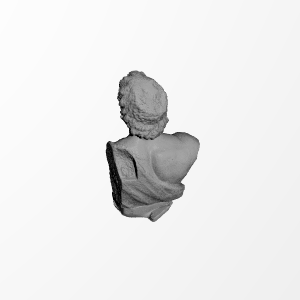 ×
6 collections where you can find Torso, Asklepios from Munichia by SMK - Statens Museum for Kunst