Torso at the Middelheim Museum

3D
Support Free Scan The World
2,547 views 130 downloads
1 collection
Community Prints Add your picture
Be the first to share a picture of this printed object
0 comments

Torso at the Middelheim Museum

Willequet was born in Brussels and grew up in Luxembourg . He followed from 1940 to 1945 studying at the sculptor Oscar Jespers at the La Cambre ( ENSAV ), formerly the École Nationale Supérieure d'Architecture et des Arts Décoratifs ( ENSAAD - La Cambre) in Brussels. In 1947 he received the second prize at the Belgian Prix de Rome . He made a trip to France and met the artist Constantin Brancusi, Zadkine and Henri Laurens . In 1951 to 1952 he studied with a scholarship to the Royal College of Art in London and met the sculptors Jacob Epstein and Henry Moore. In 1959 he was on a scholarship in Florence and Rome , and he was invited as a stone sculptor to sculptor symposium in Austria Sankt Margarethen im Burgenland . He belonged to the participants of this first Symposium Europäischer Bildhauer of Karl Prantl and was a faithful participant in symposia . 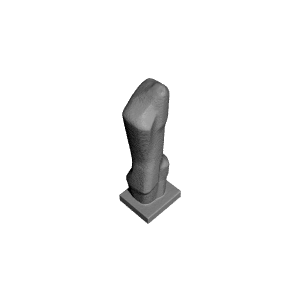