The Doryphoros (Greek, Spear-Bearer) of Polykleitos is one of the best known Greek sculptures of Classical antiquity, depicting a solidly built, muscular, standing warrior, originally bearing a spear balanced on his left shoulder. Rendered somewhat above life-size, the lost bronze original of the work would have been cast ca. 440 BC., but it is today known only from later (mainly Roman period) marble copies, like this one.

This fragmentary torso of the Doryphoros is known as The Pourtalès torso. The work was found in Rome, in a Salesian monastery on the Palatine in 1873, adopting its name from the Pourtalès Collection that it was housed in intil 1924; it is now in the Antikensammlung in Berlin (inv. 1789). It is thought that the copy originates from the time of Tiberius, reigning in the early Imperial or Republican periods.

The work nonetheless forms an important early example of both Classical Greek contrapposto and classical realism; as such, the iconic Doryphoros proved highly influential elsewhere in ancient art. 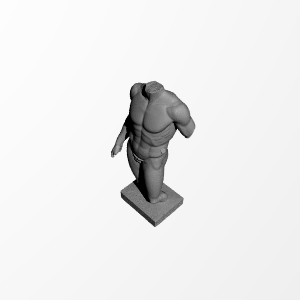