3D
360°
Featured Scan The World
2,457 views 250 downloads
2 collections
Community Prints Add your picture
Be the first to share a picture of this printed object
0 comments

This fragmented sculpture is a copy in plaster transferred from the Academy of Fine Arts in 1952, directly cast from the Greek original by the sculptor Phidias (ca. 480-430 BC). Phidias was behind the creation of the Zeus from Olympia and the Parthenon friezes and gable figures. This is one of a series of figures from the west pediment of The Parthenon in Athens, also named The Elgin Marbles after Lord Elgin who looted the area in 1816.

This statue originates from the West pediment of the Parthenon, which depicted a scene showin the mythical contest between Athena and Poseidon for supremacy over the land of Attica. It depicts a woman wearing a short, sleeveles chiton girdled at the waist, probably with a metal girdle that is now missing. The drapery clings to her body in some places, while elsewhere the folds of material flutter around restlessly. The arms and wings, which were inserted into the shoulders at the back, are missing. It has been suggested that the missing head could be the so-called Laborde head, now in the Musée de Louvre, Paris.

The statue has been identified as Iris, the winged messenger goddess. The movement of the drapery and the pose of the sculpture suggest the rush of wind against her body during flight. 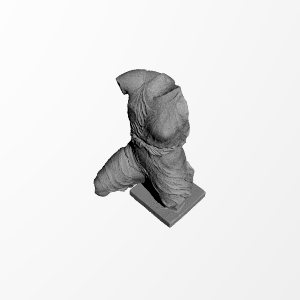 ×
2 collections where you can find Torso of a Woman, Iris by SMK - Statens Museum for Kunst