3D
Scan The World
1,327 views 108 downloads
1 collection
Community Prints Add your picture
Be the first to share a picture of this printed object
0 comments

This marble torso missing its head, forearms, and lower legs elegantly illustrate the contrapposto stance, credited to Greek sculptors, in which the weight of the body is placed on one foot so that the hip thrusts slightly forward bringing a dynamic context to the body. Most likely depicting a deity or a youthful athlete type of statue would have been set up in a sanctuary in honour of the gods. 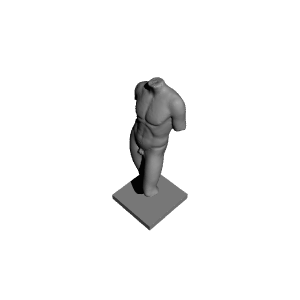