3D
360°
Featured Scan The World
2,915 views 363 downloads
4 collections
Community Prints Add your picture
Be the first to share a picture of this printed object
0 comments

This torso of Apollo originates from the east side of the large frieze at the Great Altar of Zeus at the Pergamon.

The Altar, high on a mountainside, was a huge stape-shaped colonnaded structure on a large stepped podium. It was decorated with a frieze 113 metres long depicting the favourite subject of the battles of Gods and Giants, which was no doubt intended by the Pergamene King Eumenes II, who built it, to commemorate his triumphs in Asia Minor and the eastern Aegean. It was seriously damaged in the first century AD, and again in the tenth.

The verve of the figures and composition, and the sheer size, make the frieze one of the landmarks of Hellenistic art. The reliefs are so deep as to be almost freestanding. Today, the sculptures that remain are incorporated into a reconstruction of the altar in the Pergamon Museum in Berlin. 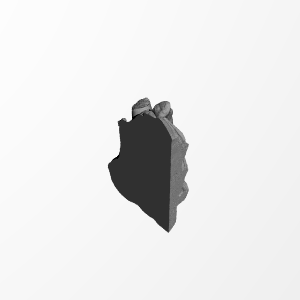