Tortured Marsyas at The Louvre, Paris

3D
Scan The World
3,415 views 126 downloads
Community Prints Add your picture
Be the first to share a picture of this printed object
0 comments

Tortured Marsyas at The Louvre, Paris

This marble sculpture is believed to have been made between the 1st and 2nd century AD, discovered around Banias in Syria. The statuette represents the satyr Marsyas being tortured. The original statue, known by many other replicas (also uploaded to Scan The World and MyMiniFactory), takes place in a group piece, now lost. Mounted by his side is the god Apollo assisting the torture with a slave holding a sytche who is cutting him. This group was created around 200 years BC.

Read more about the story of Marsyas, Venus and Apollo from the other sculpture depicting his torture here!

Another copy depicting what the original could've looked like, housed at the Victoria and Albert Museum in London, UK. 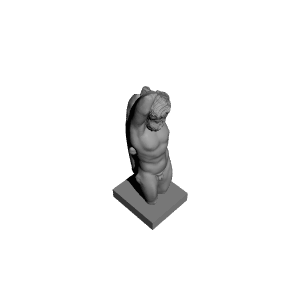 ×
0 collections where you can find Tortured Marsyas at The Louvre, Paris by Scan The World