3D
Scan The World
4,899 views 382 downloads
2 collections
Community Prints Add your picture
Be the first to share a picture of this printed object
0 comments

In a style adapted from Athenian work of the 5th century BC. One of a group of five surviving caryatids found at the site, arranged to form a colonnade in a religious sanctuary, probably of Demeter. The sanctuary was built on land owned by Regilla, wife of the Greek magnate and philosopher Herodes Atticus. One fragmentary caryatid, now in the Villa Albani, Rome, is signed by the Athenian sculptors Kriton and Nikolaos.Cook 2011, nr. 264:

‘A Statue of Isis, six feet six inches high; upon the head is the calyx of the Lotus, the symbol of this deity; The rose, chaplets, and other emblems of production are placed on other parts of the head; It is draped in a similar manner to the statue of Libera, and was found two miles beyond the tomb of Cæcilia Metella near the Appian road during the pontificate of Sixtus the fifth, who placed it in his villa, inherited by the Negroni family, and from whence it was lately brought to England.’ (TY 12/3, dining room 19; the last five words emended in the Towneley Hall version in Townley’s hand as ‘passed into this collection 1787’. The error in the date was perhaps derived from the date of payment for expenses incurred in shipping, 21 January 1787, TY 8/5/1. 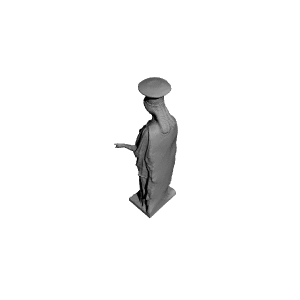 ×
2 collections where you can find Townley Cariatid at The British Museum, London by Scan The World