The statue of Trajan is an outdoor late-eighteenth-century bronze statue depicting Roman Emperor Trajan, located in front of a section of the London Wall built by Romans, at Tower Hill in London, United Kingdom. He is shown bareheaded and wearing a tunic, holding a scroll in his left hand while gesturing with his right hand raised. A plaque at its base contains the inscription: "Statue Believed To Be The Roamn Emperor Trajan / A.D. 98–117 / IMPERATOR CAESAR NERVA TRAJANUS AUGUSTUS / PRESENTED BY THE TOWER HILL IMPROVEMENT TRUST AT THE / REQUEST OF THE REVEREND P.B. CLAYTON , CH.MC.DD. / FOUNDER PADRE OF TOC H." There is no information presented at the site about the sculptor or date. 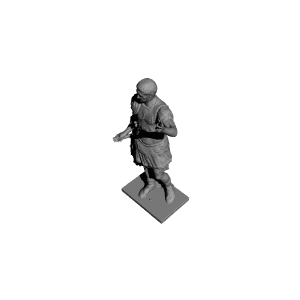 ×
0 collections where you can find Trajan at Tower Hill, London by Scan The World
×
Alf Scherer
@scherera
1
Printed on: Ultimaker 2+
Material: PLA
Posted at: 03rd December 2021

Here is Trajan in ca. 1:28 scale. Thank you very much for the scan! The resolution is not great (0.4mm nozzle, 0.15mm layers) and neither is my paint job but he still looks nice on my bookshelf.