3D
2,814 views 118 downloads
Community Prints Add your picture
Be the first to share a picture of this printed object
0 comments

You've probably seen this puzzle before. There are four pieces, in this version clearly marked with 1cm grid, which together are placed inside a simple base to form a triangle with a 1cm3 hole when assembled. However, if you put the pieces back in a different order, the hole disappears!

The hard part isn't putting the puzzle together, but figuring out: Where does the hole go?

An easy print. The version shown was printed with 20% fill in purple PLA on a MakerGear M2.

Where does the hole go?

STOP READING HERE IF YOU WANT TO FIGURE IT OUT YOURSELF.

You get a little hint as to what is happening by the fact that the pieces assembled into the base are a tight fit with the hole and have some play without the hole. In fact, the two triangles do not have the same slope, although they are close enough to look the same. The markings on the base and pieces are accurately placed at 1cm intervals, so you can confirm the slopes are different by counting grid units on the sides.

Normally, this puzzle isn't done with a base, so you don't have a straight edge to compare the bent edge with. However, the bend is small enough that it is not obvious even with the straight edge of the base to compare it against. Thus, the puzzle is made even less intuitive.

The space for the hole is really coming from having half a cube more or less of space in the gap between the parts and the base edges than you would expect by the base's apparent 5x13 dimensions. You don't notice that the base is actually slightly oversize because the grid markings have thickness, easily concealing the tiny amount of extra space needed around the edges. Naturally, in the hole-free configuration, the fit is less tight.

The moral of the puzzle, very appropriate for folks involved in 3D printing, is that tolerance issues too small to see can make a surprisingly significant and visible difference.... 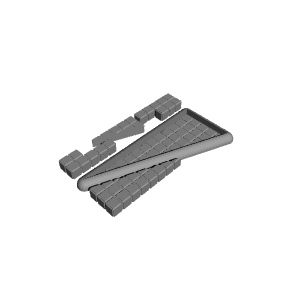