3D
Scan The World
2,678 views 129 downloads
2 collections
Community Prints Add your picture
Be the first to share a picture of this printed object
0 comments

Inspired by the Button Tower of the cathedral at Rouen, France, the Tribune Tower exemplifies the way American architects have elevated office buildings to sacred status. Newspaper publisher Colonel Robert R. McCormick held a $50,000.00 international competition to design, "the most beautiful and eye-catching office building in the world." In some estimations, it succeeded. The tower has all of the traditional elements of a skyscraper plus heritage expressed in flying buttresses, spires, grotesques, and more. The base of the Tribune Tower contains 120 stones from important locations all around the world, including the Parthenon, in Greece; the pyramids, in Egypt; the Taj Mahal, in India; the Alamo, in San Antonio; the Great Wall of China; and Injun Joe Cave in Missouri. 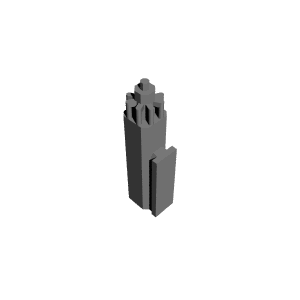 ×
2 collections where you can find Tribune Tower in Chicago, illinois by jkurstin22