Trident with image of Mariyammai at The Guimet Museum, Paris

3D
Scan The World
2,584 views 152 downloads
Community Prints Add your picture
Be the first to share a picture of this printed object
0 comments

Trident with image of Mariyammai at The Guimet Museum, Paris

Māri (Tamil: மாரி), also known as Mariamman (Tamil: மாரியம்மன்) and Mariaai (Marathi: मरी आई), both meaning "Mother Mari", spelt also Maariamma (Tamil: மாரியம்மா), or simply Amman or Aatha (Tamil:அம்மன், "mother") is the South Indian Hindu goddess of rain. She is the main South Indian mother goddess, predominant in the rural areas of Tamil Nadu, Karnataka, Andhra Pradesh and Maharashtra. Māri is closely associated with the Hindu goddesses Parvati and Durga as well as with her North Indian counterpart Shitaladevi. Goddess Mariamman and Goddess Kali are closely associated with each other.

Festivities for her happen during the late summer, early autumn season of "Aadi". Throughout the Tamil Nadu and deccan region, grand festival known as "Aadi Thiruvizha" are taken for Maariamman. Her worship mainly focuses on bringing rains and curing diseases like cholera, smallpox, and chicken pox.

She is worshipped in accordance to the local agamas as "Pidari" or the "Grama Devata" usually by non-Brahmin priests or in some cases of big temples like Samayapuram Maariamman temple, also by Brahmin priests. According to shaktha agamas, she is depicted in sitting posture and might be flanked some times by Ganesha and Subramaniya or Ganesha and Naaga on her sides. She is usually taken in procession in a decorated chariot. 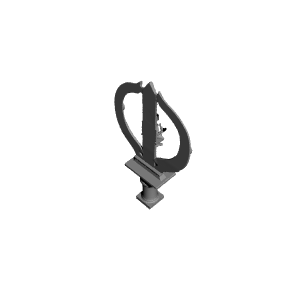 ×
0 collections where you can find Trident with image of Mariyammai at The Guimet Museum, Paris by Scan The World