3D
Scan The World
17,088 views 1,988 downloads
13 collections
Community Prints Add your picture
Be the first to share a picture of this printed object
1 comments

This impressive marble sculpture depicts a hectic scene between two Greek mythological characters. Triton, son of Neptune and messenger of the sea, is seen encountering a water nymph known as a Naiad. Triton is often represented as a merman and is often accompanied with other animals found by the water. Triton sits on a conch shell and holds a paddle while a seated naked Naiad offers him a stand of pearls.

The sculpture is larger than life, sculpted in the 19th century by Anton Schmidgruber, and can be found alongside three other similar fountains sculpted by him in the Maria Theresa Square in Bienna, Austria. 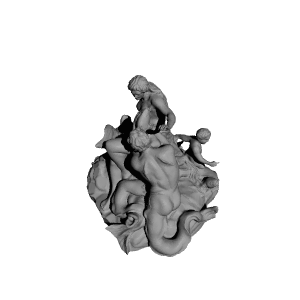 ×
13 collections where you can find Triton and a Naiad Fountain in Vienna, Austria by Scan The World