3D
Scan The World
1,355 views 182 downloads
3 collections
Community Prints Add your picture
Be the first to share a picture of this printed object
0 comments

This trumeau placed in the occidental façade of the church of Saint Marie, is similar a close in style to the one of Moissac.

The ascending movement drown around the trumeau includes some figures like gryphons, bodies, quadrupeds.

On the upper, a teenager is depicted while being attacked by a bird. This scene reminds of the rape of Ganymede by Jupiter’s eagle.

On the right part of the trumeau, the three couples of fighters are a conventional representation of the discord. On the left side instead, Abraham’s sacrifice is represented. 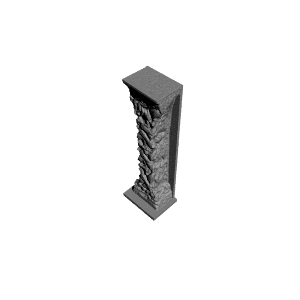