3D
Scan The World
3,046 views 124 downloads
Community Prints Add your picture
Be the first to share a picture of this printed object
0 comments

On a limestone pedestal with the inscription Mihály Tóth 1846-1925 post- flood reconstruction designer . Mihály Tóth was born in Szeged on 13 September 1845 . After working in Transylvania , he opened 1878 a office in Szeged for private engineering . In 1884 he became head of the City Engineering Office.   There are several known Szeged public buildings such as hospitals , the firehouse in the city , the Barracks Hussar and the Water Works building in the nursery buildings. In 1904 he drew the charge circuit, which is still an existing route . He is appointed to the position of artesian wells that will be drilled by Béla Zsigmondy . He made the rebuilt city streets looking at a combination of  network map.  He served 38 years in the city, through which 34 years were as chief engineer . He died in 1925 in Szeged .

Printed for PRINT3Dforum.com Just slight support on the neck area and it will be fine. 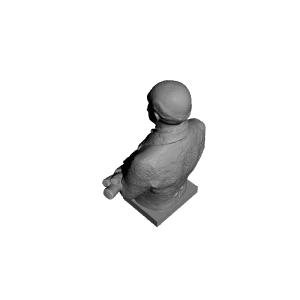 ×
0 collections where you can find Tóth Mihály in Szeged, Hungary by Scan The World