3D
Featured Scan The World
1,997 views 50 downloads
1 collection
Community Prints Add your picture
Be the first to share a picture of this printed object
0 comments

Mandible, the plaster cast of head and neck showing deformity produced by a large fibro-osseous tumour of the. At 16 years of age, the tumour was first noticed as a hard painless swelling lateral to the left lower molar teeth. Extraction of three adjoining teeth did not prevent its gradual increase and it was later "removed" by an operation. The wound did not heal even after eight months residence in the Infirmary. At the age of 25, it had attained the dimensions seen in the cast. The tumour involved the whole of the left side of the mandible and extended on the right side as far as the anterior bicuspid tooth, The tumour along with more than the left half of the lower jaw was removed by Professor Syme on 7th July 1828 and the patient made a good recovery and was known to be alive and well eighteen years later. ("Contributions to the Pathology and Practice of Surgery". J. Syme "Edinburgh 1848. 13.) 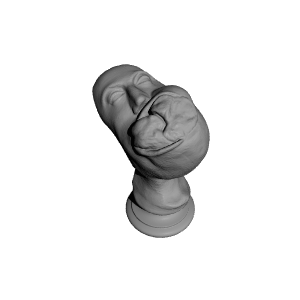 ×
1 collections where you can find Tumour, fibro-osseous by Surgeons Hall