Two carved pieces of stone from a mithraeum

3D
Scan The World
1,177 views 30 downloads
Community Prints Add your picture
Be the first to share a picture of this printed object
0 comments

Two carved pieces of stone from a mithraeum

Some workmen digging a drain in Hulme in Manchester in 1821 discovered carved stones from an ancient temple known as a mithraeum. The mithraeum was devoted to the worship of the eastern god Mithras. Worshippers believed that Mithras represented light. Two companions, called Cautes and Cautopates, helped Mithras to kill a bull, which represented evil. Worship of Mithras was very popular amongst Roman soldiers. 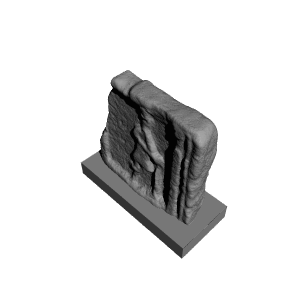