This sculpture group was commissioned by the administration of the Kings' Buildings. The marble block was delivered to the sculptor Jean-Joseph Vinache in 1747, but the work was unfinished when he died and was completed by Nicolas Francois Gillet in 1758.
It was part of the decoration of the park of the Chateau de Menars (in central France), property of Madame de Pompadour's brother the Marquis de Marigny. Vinache's original design was influenced by a sculpture group he had restored and copied, the Children with a Goat by Jaques Sarazin (also on display at the Louvre). 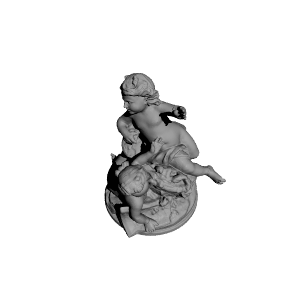